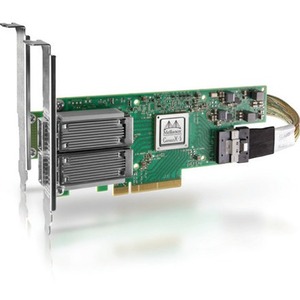 SOCKET DIRECT
ConnectX-5 Socket Direct provides 100Gb/s port speed even to servers without x16 PCIe slots by splitting the 16-lane PCIe bus into two 8-lane buses, one of which is accessible through a PCIe x8 edge connector and the other through a parallel x8 Auxiliary PCIe Connection Card, connected by a dedicated harness. Moreover, the card brings improved performance to dual-socket servers by enabling direct access from each CPU in a dual-socket server to the network through its dedicated PCIe x8 interface. In such a configuration, Socket Direct also brings lower latency and lower CPU utilization. The direct connection from each CPU to the network means the Interconnect can bypass a QPI (UPI) and the other CPU, optimizing performance and improving latency. CPU utilization is improved as each CPU handles only its own traffic and not traffic from the other CPU.

Socket Direct also enables GPUDirect® RDMA for all CPU/GPU pairs by ensuring that all GPUs are linked to CPUs close to the adapter card, and enables Intel® DDIO on both sockets by creating a direct connection between the sockets and the adapter card.

Mellanox Multi-Host™ technology, which was first introduced with ConnectX-4, is enabled in the Mellanox Socket Direct card, allowing multiple hosts to be connected into a single adapter by separating the PCIe interface into multiple and independent interfaces.

All new products are covered by the manufacturer warranty. To claim warranty, you may contact the manufacturer directly or contact your account executive at Hardware Nation. We can help facilitate the warranty processes between the customer and manufacturer.
With NVIDIA's acquisition of Mellanox, Cumulus Networks, and other brands, it has expanded its product line that now includes hardware products, such as InfiniBand switches, Spectrum switches, as well as Mellanox optics and cables. Customers can also bundle Spectrum switches with Cumulus Linux NOS to get a flexible open architecture, faster IT delivery, network protection, and complete standardization. Customers can also add NVIDIA NetQ, which is a toolset to monitor and troubleshoot your Cumulus and SONiC NOS fabrics in real-time. Hardware Nation is an authorized NVIDIA Mellanox dealer. We can help you select, deploy and manage NVIDIA technologies. We provide assessments, support and custom solutions. Get Support     Contact Sales     800.398.1262
SKU: MCX556M-ECAT-S35A Category: Host Bus Adapters Brand: Mellanox