The NVIDIA MSN2700-BS2R is an ideal spine and top-of-rack (ToR) switch, allowing maximum flexibility, with port speeds spanning from 10Gb/s to 100Gb/s per port and port density that enables full rack connectivity to any server at any speed. It is compatible with Cumulus Linux, Cumulus NetQ, SONiC, NVIDIA Onyx and DENT NOS. It is configurable with optics and software. Please contact us for technical questions or a custom bundle configuration. 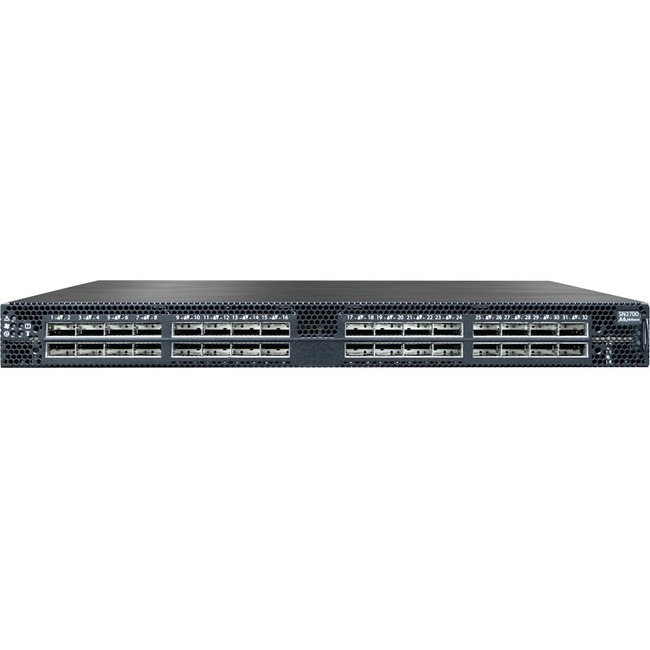 The SN2700 switch provides the most predictable, highest density 100GbE switching platform for the growing demands of today’s data centers.

The SN2700 switch is an ONIE (Open Network Install Environment) based platform for allowing a multitude of operating systems to be mounted on it and utilizing the advantages of Open Networking and the capabilities of the Mellanox SpectrumTM ASIC.

The SN2700 switch is an ideal spine and top-of-rack (ToR) solution, allowing maximum flexibility, with port speeds spanning from 10Gb/s to 100Gb/s per port and port density that enables full rack connectivity to any server at any speed. The uplink ports allow a variety of blocking ratios that suit any application requirement.

Powered by the Spectrum ASIC and packed with 32 ports running at 100GbE, the SN2700 carries a whopping throughput of 6.4Tb/s with a landmark 9.52Bpps processing capacity in a compact 1RU form factor.

Keeping with the Mellanox tradition of setting performance record switch systems, the SN2700 introduces the world’s lowest latency for a 100GbE switching and routing element, and does so while having the lowest power consumption in the market. With the SN2700, the use of 25, 40, 50 and 100GbE in large scale is enabled without changing power infrastructure facilities.

The SN2700 is part of Mellanox’s complete end-to-end solution which provides 10GbE through 100GbE interconnectivity within the data center. Other devices in this solution include ConnectX ® -4 based network interface cards, and LinkXTM copper or fiber cabling. This end-to-end solution is topped with Mellanox NEOTM, a management application that relieves some of the major obstacles when deploying a network. NEO enables a fully certified and interoperable design, speeds up time to service and eventually speeds up RoI.

While Spectrum provides the thrust and acceleration that powers the SN2700, the system gets yet another angle of capabilities while running with a powerful x86-based processor, which allows this system to not only be the highest performing switch fabric element, but also gives the ability to incorporate a Linux running server into the same device. This opens up multiple application aspects of utilizing the high CPU processing power and the best switching fabric to create a powerful machine with unique appliance capabilities that can improve numerous network implementation paradigms.

All new products are covered by the manufacturer warranty. To claim warranty, you may contact the manufacturer directly or contact your account executive at Hardware Nation. We can help facilitate the warranty processes between the customer and manufacturer.
With NVIDIA's acquisition of Mellanox, Cumulus Networks, and other brands, it has expanded its product line that now includes hardware products, such as InfiniBand switches, Spectrum switches, as well as Mellanox optics and cables. Customers can also bundle Spectrum switches with Cumulus Linux NOS to get a flexible open architecture, faster IT delivery, network protection, and complete standardization. Customers can also add NVIDIA NetQ, which is a toolset to monitor and troubleshoot your Cumulus and SONiC NOS fabrics in real-time. Hardware Nation is an authorized NVIDIA Mellanox dealer. We can help you select, deploy and manage NVIDIA technologies. We provide assessments, support and custom solutions. Get Support     Contact Sales     800.398.1262
SKU: MSN2700-BS2R Category: Switches & Bridges Brand: Mellanox