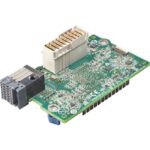 Optimized for virtualization to allow more applications and virtual machines to run on a single Synergy Compute Module.

All new products are covered by the manufacturer warranty. To claim warranty, you may contact the manufacturer directly or contact your account executive at Hardware Nation. We can help facilitate the warranty processes between the customer and manufacturer.
HPE is the worlds leading manufacturer of enterprise servers, storage, and network equipment. Hardware Nation can provide consultation, configuration services, and support for HPE equipment. We have been providing HPE enterprise products and solutions for over a decade to thousands of customers worldwide.
SKU: 777454-B21 Category: Host Bus Adapters Brand: HPE