Skip to navigation Skip to content
Shopping Cart
Covid19 and the holiday season may cause shipping delays. 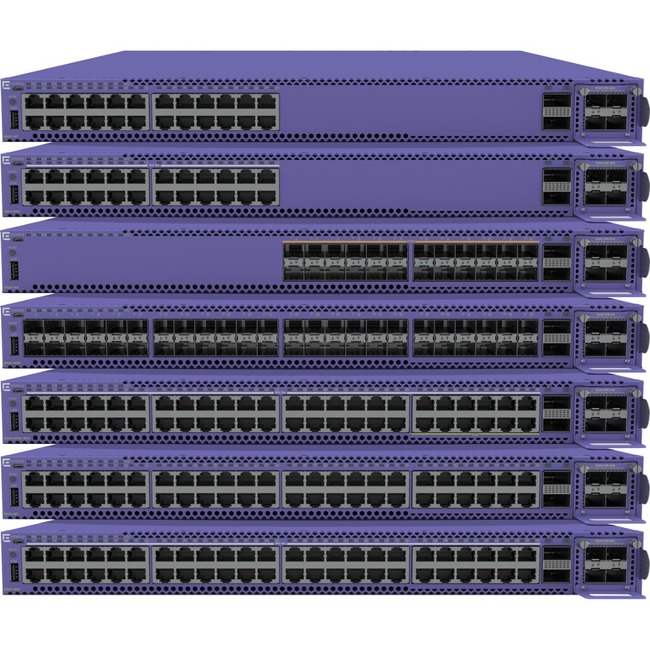 The 5520 Series includes 24- and 48-port 1 Gigabit models, 1/2.5/5 Gigabit multi-rate models, as well as a 24-port 10 Gigabit model. The family also offers 30/60/90W PoE making it an ideal wired backend for wireless APs or in support of next-gen powered Ethernet devices, such as digital signage, pan-tilt-zoom cameras, smart lighting or point-of-sale terminals. The 5520 further supports 10G and 25G modular uplinks for flexible linkage to other switches or devices over a range of media.

The 5520 Series as a universal hardware platform comes with a dual-persona capability allowing user choice of the switch operating system (OS). Either the ExtremeXOS or VSP Operating System (VOSS) persona can be enabled on 5520 hardware models. The desired persona can be selected at start-up or changed at a later stage. Once selected, the 5520 assumes the features/capabilities of the selected OS.

The 5520 persona activation can be done manually at bootup, including via the system CLI. Or, it can be automated by pre-provisioning the 5520 persona in ExtremeCloud IQ. When first booted, the 5520 automatically connects to ExtremeCloud IQ to find its persona. The pre-provisioned OS persona is then remotely enabled on the 5520 system- eliminating the need for manual selection.

Versatile Interface Modules (VIMs) on the 5520 provide flexible uplink capabilities – with 5520 models offering a single VIM slot for this purpose. VIM options include 4-port 10Gb or 25Gb modules that include LRM and 256-bit MACsec support.

The 5520 supports a variety of Ethernet Fabric services, including Extreme’s Fabric Connect when running VOSS and Extreme’s IP Fabric when running ExtremeXOS. It also supports Fabric Attach for automated connection to either Layer 2 or Layer 3 fabric services. Extreme’s Fabric Connect and IP Fabric on the 5520 enable the creation of virtualized networks that automate network operations, simplify network provisioning and enhance security, all while reducing the strain on network and IT personnel.

All new products are covered by the manufacturer warranty. To claim warranty, you may contact the manufacturer directly or contact your account executive at Hardware Nation. We can help facilitate the warranty processes between the customer and manufacturer.
SKU: 5520-48W Category: Switches & Bridges Brand: Extreme Networks